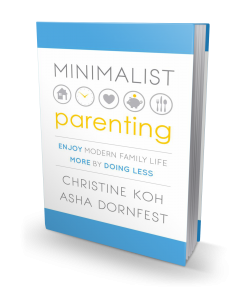 We’re in the midst of a parenting climate that feeds on “more”—more expert advice, more gear, more fear about competition and safety, and more choices to make about education, nutrition, even entertainment. The result? Overwhelmed, confused parents and over-scheduled, over-parented kids. In Minimalist Parenting, Christine Koh and Asha Dornfest offer a fresh approach to navigating all of this conflicting background “noise.” They show how to tune into your family’s unique values and priorities and confidently identify the activities, stuff, information, and people that truly merit space in your life. The book begins by showing the value of a minimalist approach, backed by the authors’ personal experience practicing it. It then leads parents through practical strategies for managing time, de-cluttering the home space, simplifying mealtimes, and streamlining recreation. Filled with parents’ personal stories, readers will come away with a unique plan for a simpler life! 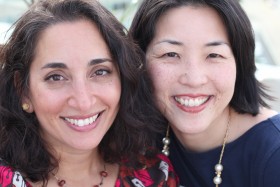 Christine Koh is a Boston lifer – a music and brain scientist turned multimedia creative. She spent a decade in academia – during which time she was awarded prestigious fellowships from the National Institutes of Health to fund her Ph.D. research at Queen’s University and joint-appointment postdoctoral fellowship at Massachusetts General Hospital/Harvard Medical School/Massachusetts Institutes of Technology. She was about to become a professor when she decided to hang up her academic spurs in favor of more flexible and independent ventures.

Christine is the founder and editor of Boston Mamas, a lifestyle portal for families in Boston and beyond, and founder of the graphic design firm Posh Peacock. Christine also is a digital strategist at Women Online (and is a co-founder of sister brands The Mission List and Pivot Boston), a freelance writer and editor, and pens a personal blog – Pop Discourse – where she gives voice to her fascination with pop culture, the intellectually interesting or absurd, Boston life, and parenthood. She also recently co-relaunched  Eat. Blog. Run., a hub for online and in person inspiration for runners.

Christine has been featured in Boston Magazine, The Boston Globe, Woman’s Day, Parents Magazine, on National Public Radio, ABC News, Metro Boston, FOX 25 Boston, and other media outlets; she has been named to Babble.com’s Top 50 Mom Bloggers, Top 50 Twitter Moms, and Top 30 Parenting Listserv lists. Her design work has been featured in Cookie, Brides, Pregnancy & Newborn, Boston Magazine Weddings, Daily Candy, and more. She lives in the Boston area with her husband Jon and daughters Laurel and Violet.

Asha Dornfest is the founder of Parent Hacks, an award-winning website devoted to sharing “forehead-smackingly smart” parenting advice. Since its launch in 2005, Parent Hacks has appeared in the Wall Street Journal, Real Simple, Family Circle, and Parents, and has been named the “#1 Most Useful” of Babble’s Top 50 Mom Blogs three of the four years the honor has been given. Nielsen named Asha one of its 16 influential “Power Pack Moms,” and she has appeared in several TV and video broadcasts including CNN and ABC News Now. Asha lives in Portland, Oregon with her husband and two children.