I started my career on the receiving end of pitches as an Assistant Producer at WUWM’s Lake Effect Program. It was an experience that lead me to book publishing (all I wanted to do was interview authors) and one that, still to this day, shapes my day-to-day life as a publicist.

So for this week’s installment of our media interview series, I’m particularly delighted to feature my former boss, Mitch Teich. He is co-host and Executive Producer of the locally-produced magazine program that airs out of Milwaukee’s NPR affiliate.

It’s on each weekday at 10am and weekends at 3pm, and introduces listeners to interesting folks from or with a connection to Milwaukee and Southeastern Wisconsin. The hour long show presents in-depth exploration and detailed discussion of issues and concerns in the arts, government and politics, the economy, money and investing, education, health and technology.

Here’s what Mitch had to say: 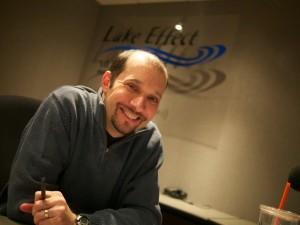 I’ve seen your desk, which is mostly covered in books – what makes you pull one out of the stack?

You’ve seen it?  Thank heavens – I thought it was lost forever!  Seriously, the rate that books and other pitches come in is far greater than the rate at which I’m able to handle them.  Naturally, books that I’m expecting get my attention first – whether it’s from an email or a phone call, or from the heads-up from one of our local booksellers that an author is coming through town.  But quite honestly, the relationships I’ve built up with book publicists over the years are also a big part of the equation.  People that I have worked with, who have consistently gotten in touch with relevant, interesting interview ideas – they’ve already earned their street cred, which leads me to gravitate towards their books.  Finally, I try to pick out the ones that won’t collapse the rest of the stack on my desk and injure any innocent bystanders.

What gets your attention in a pitch?

At our heart, we’re a local radio show, so a good local hook is really important.  That doesn’t mean that it has to be a local author, though it’s always nice when a writer has Wisconsin ties (they grew up here, they went to school here, they were a reporter for a newspaper in the state, etc.).  But even without that connection, if there’s a way to tie the subject material in to something locally relevant, that’s great for us.  Maybe it’s a book that includes a big section on the rise of innovation in the auto industry – well, it’s easy to make the connection to Milwaukee, and Harley-Davidson developing an electric motorcycle.  But the key is in pointing me to that connection if possible, so that I know it’s not just “another” book pitch.

That’s easy – a pitch that’s a half-hearted cut-and-paste effort.  I don’t expect a publicist to craft an entirely new description of the book they’re pitching for each email, but it’s easy for me to hit the ‘delete’ key when the pitch includes the name of the previous show that was on the publicist’s pitch list, or that features the wrong name of the show, or the wrong city, or something that otherwise screams, “No attention to detail!”  I try to read all the books about which I’m conducting interviews, so I appreciate some comparable effort on the part of the people pitching them to me.

Lake Effect is a magazine style radio show, which means you cover a wide variety of topics. Can you give us an idea of how you choose the topics you’ll focus on each week?

I wish there were a perfect formula I could describe.  The best estimate of how the show breaks down is about a quarter of it is driven by breaking news or events, a quarter is driven by segment ideas that have been pitched to us, a quarter of it is from regular contributors to the show who are scheduled to be on the air, and a quarter comes from enterprise work by our producers (i.e., stuff that we have a particular interest in). Sometimes all four of these things overlap in a single segment, and sometimes we produce a segment because otherwise, there would be nine minutes of dead air in the middle of our show.

In your opinion, what makes a great radio interview?

To me, the ideal guest is someone who can really put a human face on their subject.  I always say that our interviews aren’t about things – they’re about how people are affected by the things, whether that thing is government policy, or the economy, or music.  Many of our guests are pleasantly surprised when they discover that we don’t need them to deliver a TED talk, or a polished speech, but instead, want to have a conversation with them that taps into why they do what they do.