Why Being Published is So Personal

This month is a big one for me, so much so that I am departing from my usual blog format of serving up what I hope is useful information on any and all things book-related.  Instead, I’m writing from what I now fondly call my author chair, the place where I did a 180-degree career flip and wrote a book rather than promoted them.  As with so many of life’s experiences, it’s been a journey. 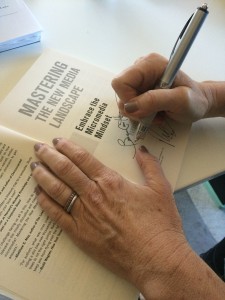 In December of 2014, I was tucked into the back seat of the family SUV on the way to Santa Fe, New Mexico for a few days of hitting the slopes.  I love skiing.  I’m terrible at it, but I love it with the unbridled affection of a toddler.  So I was feeling pretty blissful when my cell phone rang and it was my friend and colleague Rusty Shelton.  Without preamble, he began chatting rapid-fire.  “So, you remember that book proposal we put together a few years ago?” he asked.  I told him that I faintly recalled it.  “Well, remember I told you I sent it over to Berrett-Koehler after I gave a talk at their author summit?”  I told him I recalled this as well.  “Well, they want to buy it, and we need to set up a call with them before everyone leaves for the holidays.”  That I had already left for the holidays suddenly had no bearing on reality at all.  And in the space of two more phone calls, a few ski runs, and a lot of spiked hot chocolate later, I landed back at home with a book contract and a whole lot of trepidation.

For the record, I have always wanted to write a book.  And I certainly have loved them all my life.  A proud bookworm, I owned my first library card at age four, recall turning down sleepover invites so I could stay home and reread my Donna Parker mysteries, and I never consider my bag fully packed until it has a selection of reading materials.  They must be available at all times.  And I mean at all times.  Until the airlines lifted the ban on having your Kindle powered up during the pre-flight period, I was known to be a little less than cordial to the flight attendants who wanted that sucker off.  My years of bookishness also includes a stint at creating content when I spent nearly a decade as a reporter, working for radio stations and ultimately at NBC in Washington, D.C.  There, I learned to “write short” – a concept that would later haunt me as I sat at my desk working on my half of what was to be a book about the changing media world.  “Writing short” is not a quality you really want to refine when you’re contractually bound to turn in something, well, book-length.

For the next five months, I reported to work in my home office every day and charged myself with putting in at least three uninterrupted writing hours.  Some days, the result was a brief, lonely paragraph.  On others, the tally came in at five or so really solid pages.  All of this followed a single afternoon of planning with Rusty where we followed the advice of his friend, Annie Downs, and charted the course.  Armed with poster boards, Sharpies, and Post-It notes, we plotted out the chapters, slapping color-coded notes on each board for “stuff we want to say in this chapter,” “stats we need,” “anecdotes,” and “interviews.”  This gave us a fair outline as well as squatter’s rights to any of those coveted stories we were going to use to liven up a book that many envisioned as a how-to guide, but which we each secretly felt was a manifesto on the media world.  So armed, we went forth.

Then the screen goes blank.  Seriously, there isn’t a single thing I could say here that could actually explain how to write a book.  You start with a sentence, and you keep going.  Many days you will be forced to reconcile yourself to the fact that you don’t know what you are doing and don’t know why you thought you could do this to begin with.  Other days, it feels deceptively easy, and you walk around smiling thinking about how you’ve cracked this writing a book thing.  And then the next day comes, and you don’t even remember whether “a lot” is one word or two.  This goes on and on until the thing is done and you turn it in.

I’ve always said that publishing a book brings out the very best and the very worst in people, because it is a public moment.  No matter how acclaimed or exalted you are in your personal or professional sphere, when a book that you have created goes out into the world, it becomes a very public and very permanent statement.  I’ve said that for years to authors preparing to have their work seen, judged, reviewed.  The difference now is that I truly understand this firsthand.  This particular set of pages, tattooed with the words that Rusty and I painstakingly chose, has arrived in the world.  And the pride, and the fear, and the rush of excitement feels all too real.

The result of my collaboration with Rusty examines today’s media world and advises brands and individuals  on how to get noticed and grow a personal audience.  MASTERING THE NEW MEDIA LANDSCAPE: Embrace the Micromedia Mindset (Berrett-Koehler; March 7, 2016) is available in bookstores everywhere.